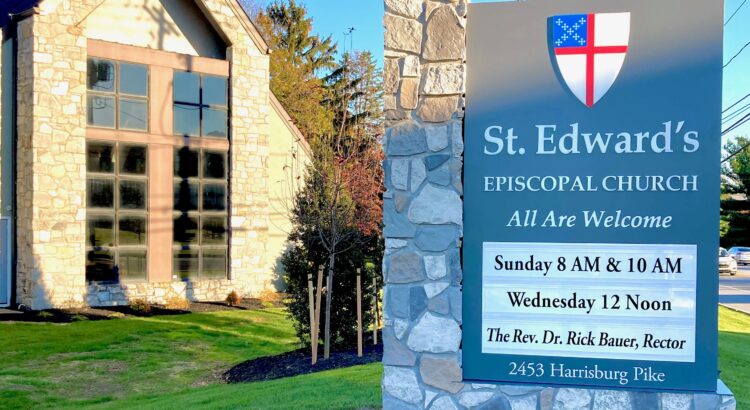 The congregation of St. Edward’s was founded in 1981 on the initiative of the Bishop and people of Diocese of Central Pennsylvania and the Episcopal Churches in Lancaster County to meet the growing needs of the community on the North-west quadrant of the city of Lancaster. The patron saint of the congregation, chosen by the youth, is St. Edward the Confessor, the last Anglo-Saxon king of England, who re-founded Westminster Abby in the 11th century and was known for his piety and charitable works. The name of the parish, therefore, reflects a commitment on the part of the people of St. Edward’s to foster a multi-generational community that reaches out to serve others.

Over the years St. Edward’s has earned a reputation of being an inclusive, welcoming, friendly community of faith. For the first ten years, the congregation met in a local Union Hall. Having purchased land alongside Harrisburg Pike, the congregation built the current church, which was consecrated in 1991. In 2005 a new parish hall was built and dedicated to meet the demands of a growing community of faithful Christians.

To learn more about our parish, our mission, and our ministry opportunities, CLICK HERE TO DOWNLOAD OUR BOOKLET.

SUNDAY SERVICES - In-person worship! We will also be offering our principal worship service at 10:00 AM, via our St. Edward's YouTube Channel. Click the link to tune in to our live streamed Sunday service at 10:00 AM on our YouTube Live channel. Please contact the parish office to be included on our mailing list .

The parish office will be closed on Mondays to take care of administrative tasks.  We are always open for pastoral emergencies.